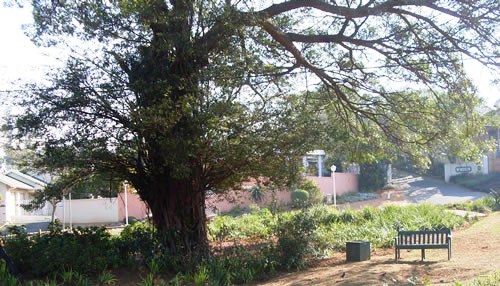 There is just one small section of the entire suburb of Somerset Park comprising more than 1000 homes which has been formally allocated as not for development and to be maintained as a public open space. Due to its size and shape it has been called The Green Belt. Being such a limited space we need to do all we can to preserve it.

There is just one small section of the entire suburb of Somerset Park comprising more than 1000 homes which has been formally allocated as not for development and to be maintained as a public open space. Due to its size and shape it has been called The Green Belt. Being such a limited space we need to do all we can to preserve it.

This tract of land was set aside for the suburb’s use in the Articles of Establishment when the suburb was created in the late1990s.

The area itself had been “created” many years before that – in fact, probably over millions of years. It appears that there has always been a natural water course in the same position as we find it today!! This we know due to the solid rock bed that is still found on the surface in certain places.

However, the predominant trees planted along the length of the area are NOT “local”! They are what most of us call Norfolk Island Pines, botanically known as Araucaria heterophylla. They are native to a tiny island in the South Pacific between Australia, New Zealand and New Caladonia. They were planted in this area by the Campbell family who owned Natal Sugar Estates which was previously based in Mt Edgecombe. Mrs Frances Campbell, widow of Bruce Campbell, on being driven around the newly formed suburb of Somerset Park about 10 years ago commented to her daughter that she remembered those trees way back in the 1930’s. They had provided shade for them when driving from Mt Edgecombe to Durban North and down to the beach between Umhlanga Rocks and what is now Glenashley!

These trees have almost reached and some have passed their “sell-by-dates”, so to speak. Each year more are found to be diseased and are having to be felled; some are collapsing in our increasingly high winds! The unhealthy ones are regarded as a risk to people and properties adjoining the Green Belt and so the Municipality is approached to destroy them.

Over the years, some indigenous trees have been sown naturally, as a result of dispersal by wind, animals or birds. This is evident by the numbers and size of some of the wonderful, big specimens of Natal Fig (Ficus natalensis) found among the Pines. This specimen of Fig tree is a strangler and those growing very close to the Pines are busy destroying the Pines naturally! Other indigenous trees, such as the Pigeonwood (Trema orientalis), have also grown naturally. This tree is regarded as a “pioneer” as it grows quickly, so providing shade and protection to other indigenous trees and shrubs! Sadly, Its lifespan is only about 25 years. 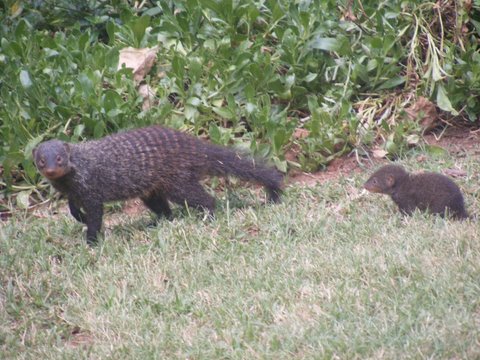 Until 2005 nothing much was done about the maintenance and development of the Green Belt, but since then, the SPHOA Board has worked closely with the various Metro Departments, particularly Parks, Recreation and Culture (hereafter referred to as Parks Dept) to try and bring this one and only “green” area into focus for the good of all residents! We have had some success, but there is still inadequate participation from Metro! Thanks to the excellent co-operation of the Northern Area Chief Horticulturist at the time, Andrew Davidson (now sadly living in USA), an area along the water course was demarcated with wooden bollards. The Metro grass-cutting teams were instructed to cut the grass from the property boundaries, to the West of the Green Belt, to the bollards on the Eastern boundary. This allows for a “conservation zone” to be created along the water course itself.

Once the area was established, 114 indigenous trees were planted in between the bollards and most of these are growing exceptionally well. Many of them will soon join the various varieties of Fig and Umdoni (Syzygium sp) trees providing food for the Vervet monkeys who share our environment. Nineteen different species of trees were planted, so there will be a good variety of foods available to them!

Other creatures that share the environment and often seen in gardens are the Banded Mongooses, and less often the Slender Mongooses. Yes! They are mongooses and NOT mongeese!! The Banded Mongooses in particular, do a great job aerating our gardens by digging for food! I know it can be a bit messy from time to time, but nature heals itself in time!! They eat many “nunus” that eat our garden plants, and snails, frogs etc, so let’s be grateful for them. In addition they are not noisy nor invasive.

Damage to the Green Belt

1. The biggest headache we experience in the Green Belt is created by mankind! Firstly, in the creating of the suburb, it appears that the Building Inspectorate paid no attention at all to the positioning of the outlets from the storm-water drains that open onto this area. Most of them do not open into the actual water-course! There are approximately 30 storm-water outlets onto this area – and roughly 8 of these are major outlets from the roads surrounding the Green Belt, of which only 4 definitely empty into the water course itself! Of the others, only two have been channelled into the actual water course, and just 1 has been “lined” in the last 5 years by the Metro Dept of Coastal Storm-water & Catchment Management, thereby preventing a donga from forming!

2. Another is mankind’s disrespect for the law, property of others and the environment! Although there are new and VERY clear signs at either end of the Green Belt between Keynsham and Somerset Drives, informing the public in words and pictures that:

People frequently disobey both of these rules for the use of the Green Belt.

Those walking dogs are asked to carry a plastic bag in which to place their dogs’ excrement which can then be deposited in one of the 4 bins – or better still – taken home and flushed down the toilet!

Some home owners whose properties border the Green Belt have persistently throw garden refuse over their boundary walls onto the Green Belt! This is illegal and where possible, this debris is being thrown back over the walls concerned. When possible, the owners are spoken to by either a Board member or the Environmental Law Enforcement Officer. There have also been occasions when paint and concrete have been discarded in this area. Our grateful thanks to those owners who were approached and who have ceased this illegal dumping!

Both the Metro Manager, Michael Sutcliffe, and the Head of the Dept of Parks, Recreation and Culture, Thembinkosi Ngcobo have been made aware of our concerns and we eagerly await some plan of action. We have already waited since October 2010 for even a reply to an email to Mr Ngcobo – so don’t hold your breath!!

The SPHOA Board just does NOT give up hope!

For your Comfort and Enjoyment

The SPHOA paid for (this means that the residents paid!) and had installed 4 monkey-proof bins and a bench. These are all made from recycled plastic and have no resale value and cannot be used to make a fire! However, they are obviously not explosive-proof and 2 bins were destroyed by fireworks on 5 November 2010 – even the concrete base of one was blown out of the ground and the panels of the same scattered around about 4 metres from the bin placement! These 2 bins have now been replaced at a cost of R3880 of Somerset Park home owners’ money.

We are glad to say that many people ARE making use of the bins which is helping the litter problems previously experienced! Now, if only the monkeys could be trained to make use of them once the they have stolen the food out of the homes in the suburb, there would be minimal litter along the Green Belt!

Residents and friends alike are invited and encouraged to take a walk through the Green Belt and enjoy the sights, smells and activities.